Krosus is the fourth boss attempted by many guilds raiding The Nighthold on Mythic difficulty. Getting a fourth boss down is the first major “wall” to progression in mythic; as of this writing, wowprogress indicated that around 2400 guilds have killed three bosses, while only around 700 have killed Krosus. One of the biggest difficulties on Krosus is soaking the Burning Pitch puddles to ensure that as few as possible adds spawn. On Mythic, Krosus demands near-perfect puddle soaking. Too many adds will result in them killing raiders, and if a player dies without a battle resurrection available on Krosus, it will likely wipe the raid. If your raid is already soaking puddles perfectly, keep doing what you are doing. If not, perhaps this guide will help. This guide will outline how to soak burning pitch, as well as give a few other Krosus tips. This guide assumes a basic familiarity with the fight, and might be most appreciated by players who have wiped several times on the boss thinking that they would be fine using the same strategy they used in heroic.

A perhaps obvious, but nonetheless key, tip to soaking is that multiple puddles that overlap may be soaked by the same player. Two puddles are generally safe to soak, and three or more may be safe with a defensive ability or cooldown. If someone else is straddling multiple puddles to soak them, you should find a different place to soak! Another key element is to leave before the puddles form so the raid team can sort out which to soak. This must be balanced with staying on boss to meet a tight DPS check. However, if everyone leaves after the puddles have appeared, the raid will likely miss puddles. A third rule of thumb is that, once someone is stationary on a puddle, assume they are staying there - you should get another puddle, not assume they will move off of it. Fourth, the back is the most important area of the room to soak. Ideally all unsoaked puddles will be near the front, in or near melee range of the boss so they can be cleaved down together.

So, how should raiders approach picking which puddle to soak? YOLO: You only live once, just wing it - tell players to soak as many as they can. This strategy has problems if players all go towards the same area initially; many players might try to soak the same puddle, leaving others unsoaked. This is fine if you outgear the boss on Heroic, but in Mythic is inadvisable. Zone: Assign players to zones of the bridge they must soak. This is certainly better than YOLO, but can cause issues if the burning pitch puddles are imbalanced - one zone may have none, whereas others may have more puddles than raiders. Order: Assign players numbers from 1-20, 20 taking the backmost puddle, and up from there. This is also better than YOLO, but can get muddy in the middle of the room as people become unsure how far back they need to go. I suggest a hybrid approach, combining the best of both worlds from zone-based and order-based strategies.

As shown in this spreadsheet, assign all non-tanks into six zones, assigning the number 1 and 2 to the tanks and 3-20 to each other player. Players 16, 18, and 20 (mobile ranged) should look to soak in the back right of the room, while players 3, 5, and 7 (melee) should look to soak in the front left. If the puddles are unbalanced, adjust on the fly, with higher-numbered players soaking towards the back. Another way to think about this six-zone strategy is as a three-zone strategy with half the players having a preference for each side. This is perhaps best explained with some examples. The following three diagrams, just like in the spreadsheet, have the boss in the front of the room with the players in the back. The green circles are burning pitch puddles, and the numbers are suggestions as to which player from the spreadsheet should soak each puddle. 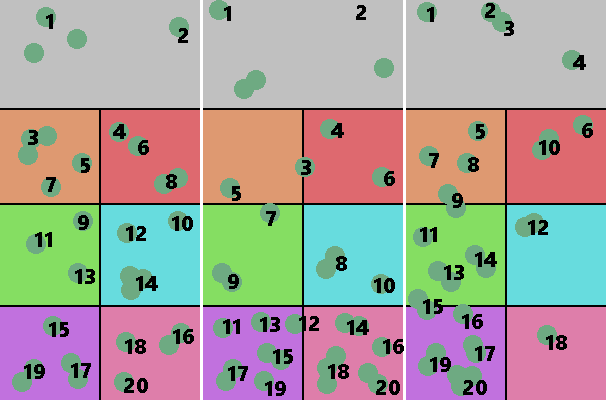 In the left diagram, everything went according to plan. There were three puddle groups in each of the six zones. Tanks soaked two puddles by the boss, and only a few adds spawned near the front.

In the middle diagram, the puddles spawned further towards the back than anticipated. The players adjusted, again only spawning a few adds near the front of the room. Several players had to soak further back than they expected - this is normal and OK. Note that sometimes tanks cannot soak any puddles if they need to be on the boss and no puddles spawn in melee range.

In the right diagram, the puddles were imbalanced towards the left. Did the players assigned to the right groups stand there and soak nothing? No, they adjusted, maintaining a preference to be on the right, but moving to left of center as needed. Even with a lopsided “unlucky” pattern, the group was able to soak every puddle, preventing any ads from spawning!

If adds do spawn, use your stuns and interrupts on them. The enlarged adds especially do a ton of damage. Preventing their casts is a huge bonus. Most classes have a stun and/or interrupt. Talent into them, and use them!

When only the last quarter of the platform remains, sticking to your assigned areas to soak burning pitch is still important. Basically the whole platform will be covered in puddles, and staying disciplined and following your zone and order assignments will result in maximized soaking. Be very careful not to overlap with another soaker - you each take the damage for no benefit.

On the last quarter of the platform, make sure that the raid is in the very front corner, and that the person with Orb of Destruction is in the very back opposite corner. A few yards makes a difference: the person in the back should run into the corner to make sure they are as far back as possible, and the raiders in the front should be on the white strip and as far forward as they can get without falling off.

The Fel Beams always follow the same pattern. Whether they start left or right is random, but after that they alternate between right and left. After a beam finishes, immediately move to side the beam was on to ensure that you are safe for the next side. This weakaura, with slight input from a raid leader each fight, will show which side is safe for every beam after the first. Our group placed markers down the left side of the platforms so everyone would know, even when disoriented, that left was marked and right was unmarked. The weakaura has left in green text and right in red text, so we placed the red X marker in the back right and green triangle in the back left to indicate which side was which to someone facing backwards. If you are dying to beam more than once in a raid night, you are doing something very, very wrong. You have tons of time to mentally prepare to be in the right place, and you know exactly where the beam will be coming.

As a note, at the end of the fight, the Burning Pitch/Slam/Orb of Destruction combination at around 5:00 is very healing intensive. Save cooldowns and personals for that stretch. Raiders should self-heal and use healing potions to make sure they don’t die. Best of luck with your kill! If you have any questions leave a comment below.